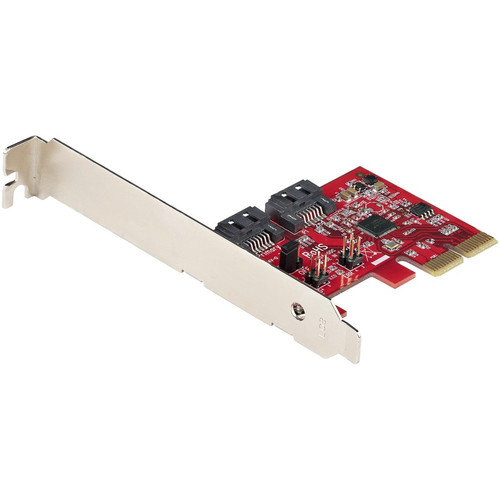 This 2-port SATA III (6Gbps) controller with RAID enables you to add two SATA 6Gbps Hard Drives (HDDs) or Solid State Drives (SSDs) to your computer system or server via an available PCIe x2 card slot, and build the disks into a hardware RAID array. The card supports SATA III and PCI-Express 2.0 Specifications, and can also be used to add optical disk drives (ODD) like CD/DVD/Blu-ray to your computer.

Featuring the ASM1062R controller, this SATA card enables the connection of two high-performance SATA 6Gbps drives with a combined total throughput of up to 8Gbps. The SATA drives are connected via two individual SATA ports located on the card (SATA cables sold separately).

The controller card is widely supported across all popular operating system platforms including Windows (7, 8, 10, 11), macOS (10.10 and above) and Linux (2.6.32 and above). Plus, with support for PCIe 2.0 and SATA III Specifications this card ensures backward compatibility with previous generations (SATA I/II, PCIe 1) at lower performance.

The SATA controller card features plug-and-play installation and can be installed in a full-profile or low-profile computer systems with the full-profile bracket preinstalled, and an interchangeable low-profile (half-height) bracket included.

2P6GR-PCIE-SATA-CARD is backed by a StarTech.com 2-year warranty and free lifetime 24/5 North American based, multi-lingual support.